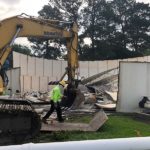 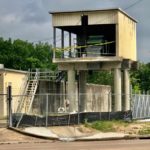 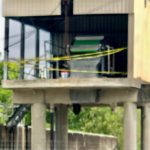 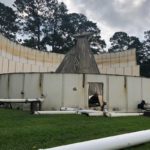 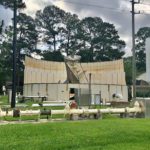 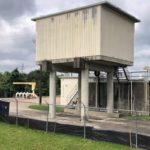 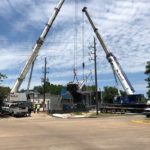 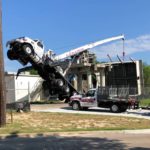 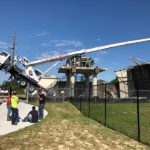 The current rate charged Prestonwood water users by the North Harris County Regional Water Authority (NHCRWA) is $4.10 per thousand gallons usage, this is a $.25 per 1,000-gallon increase over last year. NHCRWA has indicated they plan to implement annual increases in $.50 increments beginning July 1st. This cost is billed to Prestonwood Forest Utility District (PFUD) and will be passed on to the user unchanged. It shows up on your bill as a line item, “NHCRWA”.

Coincidental to these actions, PFUD is facing increased costs for the maintenance of the water and sewer infrastructure. Hurricane Harvey losses were partially recovered through our insurance. However, the need to implement mitigation measures to attempt to reduce any future flood damages from “Harvey”-like or even lesser storm events, plus the strain of maintaining a nearly 50-year-old infrastructure has caused the Board to rethink the water rates currently in place.

The Board has developed a 5-year plan to accomplish repairs, replacements and “Harvey” mitigation improvements with the intent of pay as you go, with no additional tax burden on Prestonwood users. This plan will require adjustments to the water and sewer rates for users.

Prestonwood will still maintain one of the lowest water and sewer rates in the region if not in the United States. The rates reflect the effort to promote conservation as required by State Law. Costs for usage above 5,000 gallons per month will increase incrementally as usage increases. Also, the board reluctantly determined that the “rebate”, which has been given for the last seven years, should also be eliminated to assist in funding improvements to our utility systems. The complete Rate Order is available on the Prestonwood Forest UD website at PrestonwoodForestud.org click on “Rate Order.”

The bottom line – water remains one of the best values we enjoy today. In view of the rising costs, the most effective way for everyone to keep their water costs low is to conserve this precious resource. The cost of water in the future is going to grow. The Board asks that you please read and consider the water conservation materials that we include as inserts in our mail-out bills, on-line at our web-site and as articles in the Prestonwood Press. 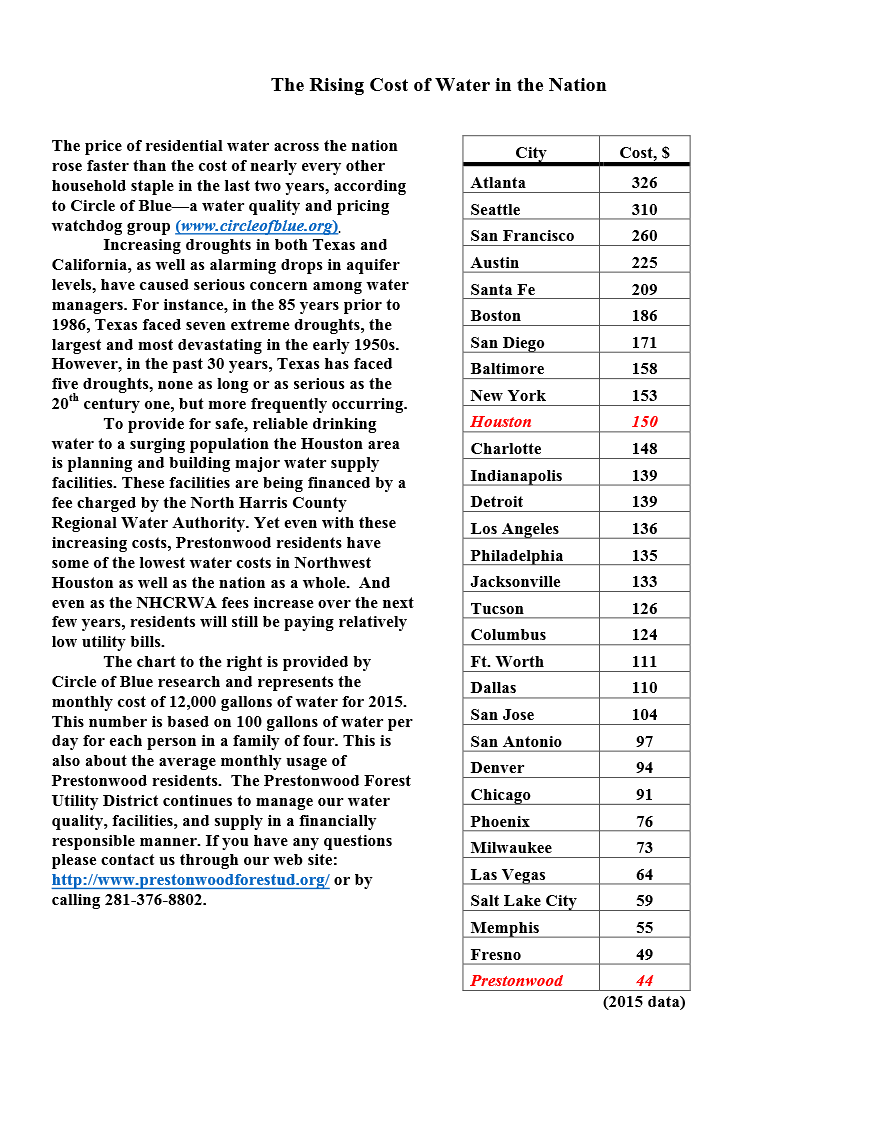 Since the development of Prestonwood Forest subdivision our drinking water has come from two wells drilled into a major aquifer system underlying most of the Houston area. Typically these wells have provided up to one million gallons of water a day during peak demand. However, with the realization of significant subsidence in the Houston area it has been mandatory that all water entities in the area convert to surface water. Subsidence is a significant problem even in our area. The Fm-249 and Fm-1960 area has subsidence of about four feet.

To minimize subsidence the area needs to stop pumping water from underground aquifers and begin using surface water. The city of Houston has already begun to do this.

Currently the city of Houston obtains about 80% of its water from surface sources. Beginning in early 2011, Prestonwood transitioned from 100% ground water to about 30% surface water and 70% ground water. By 2020 we will need to be on 70% surface water and by 2030 we will jump to 80% surface water. All of this transition takes time and money and is financed by the fees water customers pay to the Northwest Harris County Regional Water Authority (NHCRWA). For Prestonwood Forest Utility District Customers the fee is currently $2.00 per thousand gallons of water. This fee is subject to change and may increase in the future.

This surface water that NWHCRWA uses comes from Lake Houston via Lake Conroe. Water is drawn from Lake Houston by the city of Houston’s northeast water plant, treated, and 31 million gallons a day are delivered to the North Harris County Regional Water Authority’s Spears Road plant. From here it is delivered through a pipe line system to various water districts in north Houston. Prestonwood Forest Utility District receives about 300,000 gallons each day. This volume is supplemented by water from our two wells, treated, and distributed to customers in the district. As we began to use more and more surface water the city of Houston will expand their NE water plant to accommodate the increased volumes to NHCRWA.

The city of Houston has planned for future water supplies beginning back in the early 1950s. The city currently has water rights to 100% of Lake Houston, and 70% of Lake Conroe and 70% of Lake Livingston. They currently take water from the Trinity River for the Southeast Water Plant as part of their Lake Livingston water rights. In addition, a future project called Luce Bayou (named for its proximity to Luce Bayou) will divert some 300 million gallons of water a day from the Trinity River to the city of Houston’s Northeast Water Plant. From this total, up to 159 million gallons of water a day will be sold to NHCRWA and support surface water conversion and growth in north Harris County. The Luce Bayou is projected to begin deliveries to NHCRWA on July 1, 2019.

While normal rainfall in Houston is about 47 inches per year, from 1951 through 1957 the average rainfall in the Houston area was only 36 inches and other parts of Texas were even more severely limited. From 2002 to 2010 the Houston area averaged about 53 inches of rain a year, well above normal. But over the last three years we have been below normal by one inch, 5 inches, and 25 inches (2011 so far).

For 2011, the total rainfall so far is significantly lower than any previous year. With this lower rainfall level, lakes and aquifers are not being recharged as in the past. While we hope that “normal” conditions might return next year, the forecast is for a warmer and drier winter and probably another very dry summer. We may have to get use to dead trees and brown lawns, something that will surely challenge us all.

When you read about Lake Conroe or Lake Houston being lower than normal it is because of the drought and because of the conversion to surface water in the Houston area. And it’s also a warning that water usage and costs are going to be different in the future. Today, Lake Conroe is down about 10 feet from normal levels. This doesn’t sound like much for a lake 200 feet deep, but 10 feet off the top of Lake Conroe reduces the total volume of the lake by 40%. Furthermore, with lower rainfall levels our lakes are being used up and water tables in the aquifers are also dropping.

We need to think seriously about water usage during the coming months. Part of this will certainly be some type of water restrictions. Even though the water district has adequate water resources it doesn’t mean we can use water indiscriminately for any and all purposes. We want to encourage water conservation and through a combination of education, restrictions, and costs we hope to reduce both ground water usage and overall total water demand.